Your Political Posts about Trump Could Get You Fired

It’s a pretty safe bet to say that in the past couple years, Trump memes have exploded onto everyone’s social media pages, for better or for worse. To say that we Americans are talking more about politics online than ever before may be the understatement of the century. Here at Social Intel, we run into hundreds of political posts a day--some that are inappropriate, some that aren’t.

Here’s our best guidance on how to share political posts without raising any red flags.

Know your rights (and your company’s social media policy)

Don’t panic! There are some protections in place for you! You may want to check your local statutes, but it’s common for some states to include “political affiliation” as a protected class. That means as a third party service, we are required to redact anything relating to a candidate’s political affiliation when making a report for our client. Your new boss can’t fire you for being a radical leftist or a member of the Tea Party, but they can still choose to discipline you for things we find in conjunction with your political postings.

On top of that, depending on your industry or how high up you are in the company, your workplace may have a social media policy that holds you to a high or higher standard of behavior, especially if you are a public-facing employee responsible for modeling company behavior or ambassing your company’s corporate, social, or political views. However, even if you aren’t a VP or Head of Marketing, you could still be violating your social media policy if you’re logged in on a company device.

What we are actually looking for

Here at Social Intel, we have four filters that we screen all applicants for: racism/intolerance, sexually explicit content, and illegal or violent behavior. You’ll notice that “political affiliation,” in line with a few state’s laws, is not one of them. So while we wouldn’t flag your rant about Trump and his border wall, we could still potentially flag your post if it includes anything from the filters above. For example: 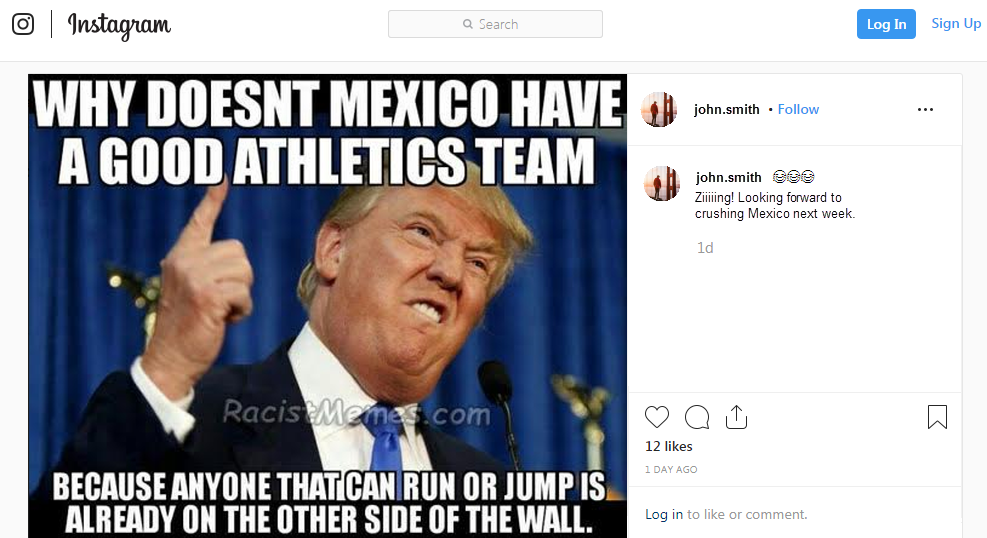 This post was clearly made by a pro-Trump sports enthusiast. While there’s nothing wrong--so far as Social Intel is concerned--with expressing political affiliation or with getting excited about a soccer match, we do have to flag it for racist content.

While some people in a more left-leaning camp might think this is funny, and while it might have been intended as a casual joke, we would still flag it for the reference to illegal activity.

We all need to take a load off sometimes, but employees should be aware that putting out explicitly racist content or crass comments that involve illegal activity is indeed reportable content.

Take it from the civil servants who have been fired

In the past couple years, we’ve seen multiple news stories involving folks who have been fired for posting in relation to Trump. While we as an agency don’t make any recommendations--we just pass along our findings--it’s helpful to know what other employers have done when they’ve found similar content. The most recent example was a schoolteacher who was fired for a string of racist, derogatory tweets asking Trump to “remove the illegals” from her school in Texas. The most cringe-worthy part of that story is she thought she was privately messaging Trump. Other stories included a pro-Trump cop who was fired for posting violent memes about Michelle Obama. Even staffers from the Trump campaign itself were fired for their racist memes on Facebook. RawStory even notes a “breakdown in the vetting process that now more than ever looks for potential public relations land mines.”

This isn’t to scare you into removing your content. However, it’s important to point out just how ordinary all of these situations are--DM’ing a public figure, or posting memes. While we’re all free to post what we like and have a political party preference, it doesn’t mean we’re immune from the consequences of posting insensitive or crass content.

Want a few grooming tips? We’ve written a bit about that.

Still confused on your free-speech rights? Don’t be! Our Ask an Analyst series answers some of your burning questions about social media screening.

Lindsey is an HR content writer and lifestyle blogger. She routinely belts showtunes in her car named Fergus and is excessively proud of her thrifting habits.